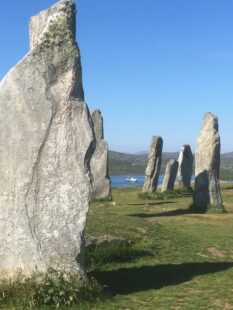 If you’ve ever looked at the standing stones which dot Scotland you might have wondered who put them there, how they moved them and why. Well it’s believed they were erected by the first settlers who arrived in Scotland more than 10,000 years ago.

If you holiday with us during the summer then you may well choose a cruise which takes you to Lewis in the Outer Hebrides. One of our daily excursions will take you to the Callanish Stones, they’ve recently gained a new legion of fans as they were used as a model for a fictional circle near Culloden called Craigh na Dun in the worldwide hit TV show Outlander.

The stones are known as Fir Bhreig in Gaelic which translates to be the ‘false men’. Many people believe they are the petrified souls of the distant past. Legend says the stones were once giants, turned to stone by a saint when they refused to convert to Christianity. And, if you visit the stones on the dawn of the midsummer solstice then be prepared to witness a spectre who visits each year to walk around the stones.

Nobody knows for sure why the stones are arranged in their particular location and formation but popular theories include it being a prehistoric lunar observatory. Others believe it is a relationship between the stones, the moon, and the Clisham range on the Isle of Harris.

However, if you travel with us in spring and autumn you may well visit the island of Arran. One of the most ancient stone circles on the island is on Machrie Moor and legend has it that a group of fairies once sat on top of the mountain, Durra-na-each and spent their time flicking pebbles onto the moor below. These pebbles grew into large stones to form the six stone circles of Machrie Moor.

One of Scotland’s most legendary figures is Fionn MacCuill (of Fingal’s Cave fame) and he turns up in many of the area’s stories and folklore. It should come as no surprise to find this giant making an appearance at Machrie Moor, where he made claim to another legend, the double stone circle. This is called Suide Choir Fhionn in Gaelic, translated to mean Fingal’s Cauldron Seat.

According to the stories Fionn used the stone with the hole in its outer circle to tether his dogs Bran and Scaolain while he ate a meal within the inner ring.

We have had a very happy memorable family holiday with all 4 generations on board. Ailsa Craig in the sun!

One of the best trips of my life! The birds, seals, whales and dolphins, even the jellyfish are in my heart. Many many thanks to you.

Really fab food, company and trip. Thanks for a lovely time! Will be back!!