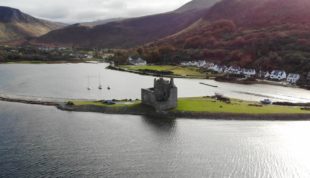 Our April legend takes us to Skipper Iain’s beloved Clyde coast, and one of our favourite anchorages, Lochranza on the beautiful island of Arran.

A young girl was droving her cattle to their pens but despite her best efforts the cows refused to behave. She tried and tried but the beasts refusal to do as they were told got the better of her and she decided to leave them and go home.

As she walked round the head of the loch she saw a young man sitting on the fence. Despite his age he was dressed in old fashioned clothing and there was something about his demeanour which made her uneasy. She decided to cross the road to avoid him but he called to her. His voice was hypnotic and before she knew it she was standing in front of him. The man pulled out a beautiful, elaborate comb which shone in the morning sun.

He stared at her and suddenly placed the comb in her hand saying, ‘Take it, keep it.’ The comb was light, strong and beautifully made but she would not keep it, she knew it was a trick, so she refused and handed it back.

As soon as she did she felt as if she’d been released from a spell. The man looked sad and asked if she would ‘Do just one thing for me and comb my hair?’ The girl agreed and started to comb the man’s golden hair. But as she combed sand, small seashells and starfish started to fall from his hair. She dropped the comb, turned and ran for home, terrified. Bursting into her parents’ kitchen she told them the story. Furious her parents went immediately to find the man who had so scared their daughter. There was no sign of him except for a pile of sand, seashells and starfish which formed a perfect triskele, the three-legged spiral which has great significance in Celtic folklore.

The girl and her family tried to forget about the incident until an old woman who also lived in Lochranza came to their cottage. She explained the man was the sea god Mannanan Mac Lir whose underwater kingdom covered the Isle of Arran (Emhain Abhlach) and the Isle of Man (Inish Falga). She said he’d been looking to take a human woman to his realm and he would no doubt return to look for another….

The moral of this story? Watch your step and beware of handsome, golden-haired strangers when Splendour drops you off in Lochranza…

Truly words fail me – beautiful boat, attentive crew, food that has surpassed anything I have had. Wonderful!

What a wonderful trip. Exceeded all expectations. Thank you for all your care and attention.