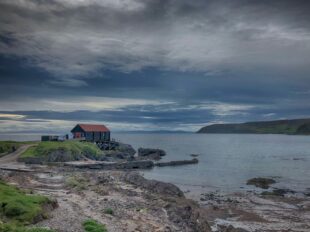 Kintyre is always close to us when we’re on our Clyde cruises. The low, fertile, gentle land belies the notorious waters around the Mull of Kintyre, it’s no wonder Saint Columba’s first footsteps on Scottish soil were taken at the most southerly tip of the Kintyre peninsula, at Southend following the crossing from Ireland!

This legend from Splendour’s wheelhouse is set in Campbeltown, Kintyre’s biggest town, which itself is steeped in history and legend.

Lying to the south side of the town lies Beinn Gullion (Ben Gul-yon), a hill which dominates the landscape and where you’ll find the Piper’s Cave.

Long ago Campbeltown was home to a piper who played almost magical music on his bagpipes, beguiling anyone who heard it. It was said the piper was the only man to escape the massacre at Dunavery and he was always seen, with his dog, playing his bagpipes to get money for food.

As the man grew old, he became weak and frail although his playing remained as strong and melodious as ever. As his appearance became more dishevelled the local authorities agreed he should be put into care and his loyal dog drowned in the loch.

Whether someone told him the authorities were going to take him or he had second sight the piper gathered his things together and headed to Beinn Guillion, searching for somewhere to shelter. He found a cave on the north side of the hill, close to the summit and covered by thick bracken. On finding the cave the man turned round to face Campbeltown which lay at the bottom of the hill, far below and he played the Lament of Flodden. Filled with shame for their actions the authorities sent runners to bring the man back to the town. But despite the runners getting to the hill quickly, the music grew weaker before stopping completely. The runners reached the top of Beinn Guillion but found no sign of the piper or his dog. The only trace ever found was one of the piper’s shoes at the entrance to the cave.

Months later a Southend farmer was out looking after his sheep when he saw a small dog come out of an opening in some rocks. The dog was hairless and scared and the farmer went into the cave to see if his master had fallen and injured himself. There was no sign of anyone but when he called out he heard the unmistakable sound of the bagpipes playing a dirge.

The farmer left the cave quickly, carrying the dog and took him home. When the dog died many years later the farmer buried him near the opening of the cave where he found him.
Was this the piper’s dog? We certainly believe it was, and if you’re with us as we pass Southend you’ll notice Skipper Iain goes quiet, as if he’s listening for the sound of bagpipes in the distance.

A fantastic trip which hugely exceeded our expectations. Wonderful food and locations, but even more memorable is the warmth and friendliness – a real pleasure.

Wonderful, in my mind forever.

Three days of sailing and cycling 90km in spite of the weather. A gem of a boat, very comfortable and complemented by gourmet meals. Thanks for a great few days!