Your crew will provide everything you need for an unforgettable adventure.  There are two crew members on board each cruise; Skipper Ted and Chef Iggy. Supporting them shore side are Ted’s sister Claire and former Skipper Iain. 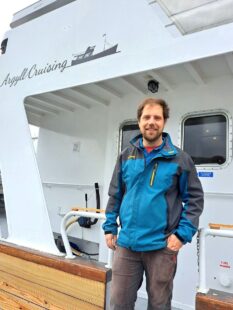 Skipper and owner Ted was brought up in Surrey, England, but spent all of his holidays in Scotland, whether in the family home in Tighnabruaich, or exploring the highlands and islands. He always felt happiest at sea – out fishing in a Drascombe or teaching sailing.

For the last decade or so he’s been working as a tour guide and skipper here on the west coast and further afield in locations such as Svalbard, the Caribbean and the Antarctic.

Ted has a degree in Marine Biology and Oceanography and enjoys nothing more than our local wildlife. He’s delivered lectures and guided tours on everything from penguins and whales in the Antarctic, to coral reefs in the Caribbean, through to our local puffins, seals, porpoises and oyster catchers – all of which can be seen from Splendour.

Nothing is more important to Ted than spreading knowledge and enthusiasm for this beautiful area and we at Argyll Cruising pride ourselves on giving our guests the best possible cruising experience. Ted, and the whole team, are looking forward to meeting you and welcoming you on board Splendour. 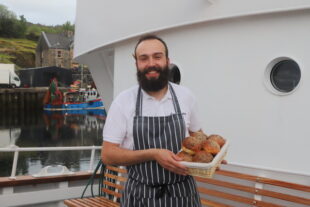 With great delight we can announce that Chef Iggy has agreed to join us for a second season on board Splendour. Iggy originally came aboard in the 2021 season and wowed guests with his food.

Iggy is passionate about food and shares our love of provenance, quality and using local produce, especially from the west coast’s natural larder. Using the freshest in-season ingredients has always been a highlight of our cruises, and Iggy’s love of barbequing ticks all the boxes for us! We can’t wait for you to try barbecued line caught fish, fresh seafood and vegetables, as you sit enjoying the glorious scenery at Splendour’s on-deck dinning table.

Iggy moved to Scotland from his home in Lithuania seven years ago. Since then he has worked in restaurants on the Isle of Skye, Fort William, Kinlochleven, Glasgow and Edinburgh. He has a love for Italian food and has over a decade of experience and training in Italian cuisine.

If you have any dietary requirements please let us know and Chef Iggy will prepare something special just for you. Nothing is too much trouble and we want everyone to feel special while on holiday with us.

And while we pride ourselves on turning every mealtime into a special occasion, there are also plenty of treats in-between, which include boat-made cookies, cakes and tablet (our favourite). Be warned, these can become addictive!

A fantastic trip which hugely exceeded our expectations. Wonderful food and locations, but even more memorable will be Iain and Chef’s warmth and friendliness – a real pleasure to meet you both.

Three days of sailing and cycling 90km in spite of the weather. A gem of a boat, very comfortable and complemented by gourmet meals. Thanks Iain and Mike for a great few days!

Where to begin? Such a delightful week! If you’re a guest reading this at the outset, you’re in for a real treat. Mike works nothing short of magic in that little galley, producing delicacy after delicacy – A true feast and Iain’s expert knowledge of this boat, the area , its history, the islands – Spectacular walks, sights and company! Can’t wait to come back next year.