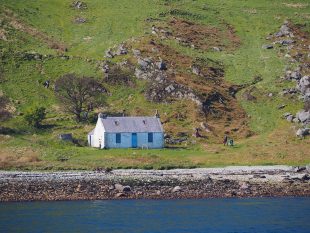 It was all aboard Splendour as we set off under cloudless skies for one of our favourite cruises on Saturday 13 May. It’s our six night Arran and Ailsa Craig Wildlife Explorer Cruise, which takes in some of Scotland’s best sailing waters. It was a choppy start when we left Dunoon, but the sheltered waters of the Kyles of Bute were, as always, very welcoming.

We’re delighted to welcome returning guests Elizabeth and Alister back with us and immediately they started a bird count adding species after species as we cruised past the Burnt Isles on our way to Loch Riddon for our first overnight anchorage.

Another beautiful day dawns and all guests decide to take the Caladh Harbour walk. This is a beautiful shore walk and there’s every chance of spotting red squirrels, roe deer and a lots of woodland song birds. As well as seeing some Rock Pipit, Willow Warblers, Robins and Pied Wagtail, the group were treated to a fly past by a Golden Eagle. And that’s not all, there was a more unexpected sight when the group met a very large slow worm, described by Skipper Iain as ‘huge’!

While the group were working up an appetite on their walk, Chef Steve was baking our favourite chocolate cookies. So it was back aboard Splendour with cookies and coffee while we set off through the West Kyle to St Ninian’s Bay for lunch. We spent the afternoon taking a bright, breezy trip along the Ardlamont Shore to visit the Common Seal colony at Black Harbour. We counted 36 seals before continuing north up Loch Fyne to our overnight anchorage In Loch Gair, where we were met by: Red Throated Divers, Red Breasted Mergansers, Shell Eider, Mallard Ducks and Common Seals – quite the welcoming committee!

After a breakfast of the famous Loch Fyne Kippers we were on our way to Otter Spit where we head off on a walk from the perch to the shore, spotting some Sandwich Terns sitting on the bouys at Otter Ferry.

Cruising up Loch Fyne we circle Eilan Eoghan where we hoped to find the nesting site for a small group of Puffins. Sadly we had no luck, and this elusive site remains hidden for now. We do however spot the first young of the season, five Greylag goslings with their doting parents. We’re still basking in the sunshine so we head for Crarae Gardens, which is incredible at the moment with colour everywhere you look. We’re right in the middle of the Rhododendron Festival and competition for the most colourful flower was fierce with azaleas and magnolia, as well as a carpet of bluebells vying for position. Time to get back onboard Splendour and head to Glenan Bay overnight.

With blue skies and no clouds Skipper Iain decides to head for the delights of Lochranza and cruises down the Kilbrannan Sound for a trip to Ailsa Craig. Arran revealed itself slowly from the heat haze as we travelled south, and, as Skipper Iain predicted, Ailsa Craig did not disappoint. Gannets were in full song, Guilliemots were there in their thousands along with Razorbills, Kittiwates, Fulmars and our favourites, Puffins.

Breakfast over and we head north to Lochranza, it’s another fabulous day of unbroken sunshine, and we will never get tired of writing those words! Glen Sannox looks stunning as we cruise past. We see Red Deer on the Hill and Chef Steve is the first otter spotter of the cruise, in amongst the seals.

After lunch Andy, Alister and Elizabeth go ashore to find Huttons Unconformity. This is one of the most famous places in the study of geology and the history of the earth. James Hutton found evidence here which helped him develop his revolutionary theories about the earth, leading to the science of geology. Steve and Angela hike to Glen Catacol and back over the top where they had unbroken, huge panoramic views. Rosemary and Francis opted to paint and sketch the castle and Jo had the best idea, heading for a tour of Arran’s whisky distillery! All back aboard and we’re off to Ardscalpsie Bay on Bute for our overnight mooring.

Sunny, sunny, sunny again and we head east to the pretty village of Millport on Great Cumbrae. Half the group cycle round the island while the rest visit the museum, the cathedra and Skipper Iain’s favourite Ritz Café to enjoy Millport’s famous ice cream. We have lunch on the move, cruising north along the Clyde and Loch Long. We were joined by a school of porpoise and a possible sighting of a pair of Golden Eagles in the distance. Most guests opt for a walk when we reach Arrochar to work up an appetite for Chef Steve’s dinner of pigeon, followed by tender beef steak and Scottish cheeses.

All too soon we’re heading back down Loch Long and into the Holy Loch, but what a week! Wall to wall sunshine, and as a final farewell to our guests, Chef Steve spots a Golden Eagle soaring above Ardentinny…

So Memorable! Gorgeous boat, great crew, anchorages and wildlife, not to mention the cooking! See you next year!

Supercalifragilisticexpialidocious! Splendour is magnificent. Thank you for a wonderful 3 memorable days.