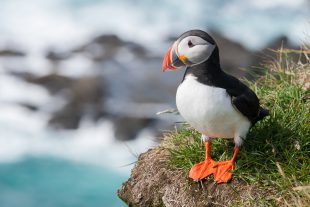 Ailsa Craig is now managed as an RSPB Nature Reserve, an SSSI and designated a Special Protection Area. Let us take you there on our Arran and Ailsa Craig Wildlife Explorer

Puffins were once the most common bird breeding on the island until rats managed to come ashore, probably from shipwrecks.  The first rat was reported in 1889 and, however they got there, the rats had a devastating impact on Ailsa Craig’s puffins. One ornithologist put the population at at least a quarter of a million pairs in the 1860s. There were so many, he said, that when he disturbed them, they caused “a bewildering darkness” in the sky. By 1935 Puffins were all but extinct on the island.  The Puffins nested on the ground in burrows and their eggs and chicks were easy prey from rats.  Other ground breeding birds such as petrels and gulls were similarly affected and in general all bird species declined. Eventually a rat eradication programme was launched in 1989 and success was declared in 1991.

It took a while for the Puffins to return to the island – it was not until 2002 a few pairs of Puffins returned to breed successfully on Ailsa Craig for the first time in many decades. The colony increased to 10 pairs in 2004 and now at least 130 pairs breed on the rock. Ailsa Craig, a Puffin success story – but there is still a long way to go before the estimated 250,000 breeding birds of a century ago.

The following numbers of pairs of seabirds breed on Ailsa Craig:

In addition Manx Shearwaters, Storm Petrels and Skuas are seen offshore on a regular basis in summer and autumn.

We have had the most memorable few days – wonderful. Thank you so much.

Beautiful days, wonderful company and hosts – thank you for the complete treat. We were spoiled.

We had a wonderful week, fantastic food, thanks to Mike for taking us up Alisa Craig, Iain for lobster escapade and a great trip.