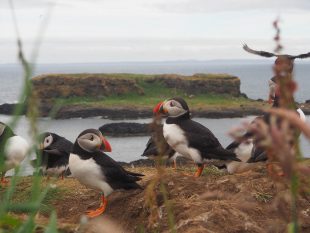 One of our mini cruises is our three-night Magic of Mull cruise. Last week Skipper Iain and Chef Mike welcomed guests onboard Splendour and set sail for a cruise packed with adventures.

As Splendour sailed out of Oban, guests settled back on the deck they were treated to a game of seal spotting, before being wowed by the antics of porpoise in the sound of Mull.

We headed for Tobermory first on our mini cruise adventure, the coloured houses huddled round the harbour is a familiar sight, even for those who have never visited the island before. Tobermory is always a busy harbour and Splendour moored alongside visiting yachts and motorboats, all here to explore Scotland’s glorious west coast. As always, our cruises are a foodie’s paradise and anchored in Tobermory our guests dined on Salad Nicoise, followed by seared Loch Fyne salmon on a bed of spinach with a chive and shallot beurre blanc (this is why all our guests want Chef Mike to go home with them), accompanied by champ potatoes, leeks, mangetout and sprouting broccoli, followed by three cheeses from Scotland, France and the south of England.

Guests awoke to the unmistakable aroma of Loch Fyne kippers from Tarbert, before stretching their legs on a trip into Tobermory. We always say there’s something new to discover on our mini cruises and cruise veteran Rob, who was on his sixth trip with us, proved that by finding a 14-year-old cask strength malt whisky – Slainte!

Back onboard Splendour and we headed out west, enjoying Chef Mike’s butternut squash and parmesan soup and boat-made Irish soda bread made to his mum’s recipe. Lunga’s puffins had all the guests reaching for their cameras as these colourful clowns performed for them, and then it was onto Staffa for a closer look at Fingal’s Cave. For anyone who doesn’t know, this cave is an important site in Irish and Scottish Legends. Known to the Celts as Uamh-Binn or The Cave of Melody, the most common Irish legend explains the cave is similar in structure to the Giant’s Causeway in Ireland. Both are made of the same neat basalt columns, the legend states they were the end pieces of a bridge built by the Irish giant Finn McCool to make it to Scotland to fight his Scottish giant counterpart Benandonner.

Unfortunately, the swell was too big for Splendour’s tender to safely enter the cave, so Splendour lifted anchor and headed for the tiny island of Gometra to harbour overnight. Judith, Pat and Ken hadn’t yet had enough adventure and took to Gometra’s sheltered bay in Splendour’s kayaks, while Rob and Lynda spotted sea eagles and an enormous red stag from Splendour’s upper decks. This idyllic day was brought to an end with a dinner of roast breast of corn-fed chicken on a bed of creamed leeks with cumin and a tarragon jus. This was accompanied by boulangerie potatoes, lemon and chive carrots and sugar snap peas, followed by the taste of summer itself, Scottish raspberry Eton mess and vanilla ice cream.

As our last full day dawned everyone was eager to lift anchor and, as Skipper Iain put it, have a crack at Fingal’s Cave. The swell had subsided, Splendour was anchored off Staffa and Chef Mike took two happy tender loads of guests into the iconic cave. To say this was the highlight of the mini cruise is an understatement.  Fingal’s Cave is 72 feet tall and 270 feet deep, but what makes it so incredible is its hexagonal columns of basalt, arranged in neat pillars which make up its interior walls.

Fingal’s Cave makes an impression on everyone who visits it, and If you want to walk in the footsteps of Queen Victoria and Pink Floyd (yes really), then make sure you’re with us on our next Magic of Mull mini cruise.

To cross one thing off your bucket list is amazing, to do two in one day is astonishing! But up next was a visit to Iona. Our group split into two, the walkers and the Abbey visitors. Lunch of individual macaroni cheese, green salad, olives and a cucumber salad in a yoghurt and mint dressing was enjoyed anchored in the sound of Iona with a wonderful view of the Abbey.

Iona Abbey was founded by St Columba in 563, and although little remains of the original buildings, it has been a seat of pilgrimage across the centuries and remains one of Scotland’s most historic and sacred sites.

One last treat awaited our guests as the cruise from Iona took them round the rugged and beautiful south coast of Mull to Loch Spelve for overnight anchorage. The journey saw wild goats, red deer, sea eagles and bottlenosed dolphins and on entering Loch Spelve, Chef Mike left in the tender to buy local mussels for the evening’s starter. These were prepared in Loch Fyne ale, shallots, garlic, root ginger and fresh coriander together with a granary bread. They were followed by grilled fillets of sea bass on a cauliflower puree and tomato and basil essence, accompanied by Ayrshire potatoes, roast asparagus and fine beans.

If you’re interested in history, Scottish islands, heroes and legends then don’t ‘mull’ it over, make sure you’re onboard Splendour for our next Magic of Mull cruise. DO IT ONLINE…

Thank you for a Splendour-us time in the little islands of the Inner Hebrides. The company was great and the food over the top! Lovely part of the world and excitement to remember. Have a wonderful rest of the season and visit us in the US.

The perfect way to end the first leg of our honeymoon! We loved it! The short cruise around these beautiful islands has been a delight – as has the company. Thank you to crew and guests – you’ve helped make the start of our married lives together so memorable! We hope to be back!!

Such a delightful week! Can’t wait to come back next year.