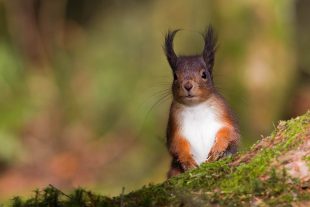 The smallest of Scotland’s Big Five. You’d need at least 400 to match the weight of one red deer stag in his prime. But in the case of the red squirrel, small is most definitely beautiful.

A red squirrel, any red squirrel, is enchanting. Young ones, out in early summer to learn about their woodland world, hone their acrobatic skills as they hang upside down from branches or play- chase each other around tree trunks.

Red On The Map – No wonder the red squirrel is one of Scotland’s most popular creatures. Perhaps 120,000 animals live here: that’s more than three-quarters of all the red squirrels in the United Kingdom. Whilst greys have taken over in much of the central belt and in many of our towns and cities, reds can still be found on many of our shore excursions – especially our 3-night Kyles and the Isles cruise . There are none on the islands, except for Arran (where they were introduced). But you’ll need to be alert for the signs if you want to see red for real.

Seeing Red – If the cone looks like a nibbled corn-on-the-cob, frayed around most of its surface, with just a twist of uneaten material at the top, that’s another sign. Look up to scan the treetops and branches for squirrel action. You might see a ball of twigs high in the branches and close to a trunk, this could be a squirrel home or ‘drey’. Amazingly, for all their gorgeous coat colours, squirrels have very limited colour vision. They see each other in dull shades of grey. But they’ve much better eyesight than us in other ways. Squirrels have almost wrap-round vision. They can see things in excellent detail far to the side, while also keeping a sharp eye on things that are overhead and below. And they are also very, very quick to notice movement. That means that the best way to get more than a brief glimpse of a red squirrel, if you’ve caught sight of one, is to stop in your tracks. Don’t move, if you can manage it, and the squirrel might forget you are there. What follows is guaranteed to be interesting, even if all you notice is how the squirrel can climb and descend a tree trunk.

Ups and downs, squirrel-style – Going up is fairly simple, as the squirrel uses all its four feet, spread wide, with claws hooking the bark to give grip. You might hear the click or scratch of claws against the rough bark of the tree trunk. Hind legs provide the power, and the squirrel may climb by spiralling around the trunk: now you see it, now you don’t. Going down is the clever bit. By rotating its hind feet through 180 degrees, it can grip while upside down and then use gravity to help it descend. What’s more, it can do all this, whether up or down, very quickly. Movement on and between the trees can get even faster, and noisier, at courtship times, both in January and February and from late spring to early summer.

Hot Pursuits – That’s when males make big efforts to pursue females. One challenge for a male whose mind is turned to mating is that a female is only fertile for a single day during each courtship season. So a male must prove himself over other challengers through the chase – fast – sometimes for hours. At rest, the male might try to catch the female’s attention by flicking his tail and chattering. But when he tries to get close, she’ll most likely scurry for a tree. She can dash to the very top, then leap to another tree, spiralling its trunk in a blur of orange- red. Then she’ll do the same – again and again. Eventually, she’ll signal that she’s ready for a closer encounter by making a soft, chattering call. That’s the kind of detail only a few red squirrel watchers are fortunate enough to see or hear. But you just might see the results of a chase like that, months later, when some young squirrels venture out from their drey. One day, they too could make moves as fast as their parents. For now, just sit back, stay still, and enjoy!

Lovely trip with perfect weather and great company. Thanks to Ted and Iggy.

Incredible holiday! We loved every minute. Thank you for making it so great!

We have had a very happy memorable family holiday with all 4 generations on board. Ailsa Craig in the sun!