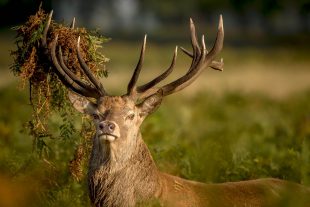 The largest of Scotland’s Big Five and interestingly those living in woodlands are larger than the deer living on the open hill. Trees, grasses and fungi give the strongest seasonal colours, together with the shifting tones of clouds and sky. But red deer, more than any other creature or other source, give the sound on still days: the roars and rumbles in the hills; the natural thunder in the glens. It’s the males, the stags who shape this soundscape. And they’ve plenty of lung power to do it!

Bigging It Up – The red deer is the largest land mammal in Britain and Ireland and one of the biggest deer in the world. Individual red deer vary a great deal in size, with stags larger than females (hinds). A fine stag could stand well over a metre high at the shoulder and weigh as much as 190kg. The feature that sets stags apart from hinds; the headgear, that gives the classic red deer profile, seen in silhouette against the sky; the crown that makes the red deer the iconic monarch of the glen. Only the males sport these bony, much-branched head growths. They sprout each year, are shed and then grow afresh from under a covering of blood-rich ‘velvet’ skin the following year. Antlers grow larger as a stag gets older, and there are characterful names for different stages of this progress. A one-year-old stag with small antlers can be a ‘knobber’, a two-year-old a ‘pricket’. By the time a stag is six, he might be a magnificent twelve-pointer – a ‘royal’. Later, some might even achieve the top score of 16 points. Some stags, called ‘hummels’ lack antlers, as do all the hinds.

The Power Of Lust – For much of the year, stags live apart from the hinds, wandering alone or grazing quietly with other males. If you’re lucky, you might see a group in the distance, perhaps as silhouettes against a ridge: glimpsed, then gone. Or explore Loch Ranza on our 6-night Wildlife Cruise for a close encounter with these wild beasts!  Come autumn, everything changes. The stags get restless. Their antlers, newly grown in summer, have hardened. The velvet on them has peeled off or been rubbed away. But there’s a fresh itch – and no wonder. In September, levels of testosterone skyrockets in mature stags. Suddenly, the males seem irritated by each other’s company. They strike poses to show-off their size, get tetchy, pick small fights. By the middle of the month, it’s every stag for himself. Each turns his back on the summer grazings and goes off to stake his claim. For what every stag over five years old wants, now that autumn is in the air, is a group of hinds that he can win and keep for himself: a harem. Hinds usually stay together in all-female groups, this gives the stags a chance to try and mate with more than one female. To do this, they need strength, stamina, antler power, sometimes a bit of cunning and certainly some magnificent voice projection.

Listening In – Roaring is a guttural, deep-throated sound, pushed-out from lungs in blasts of noise as the stag’s breath steams the chill in the air. It’s an advert to hinds – ‘Listen to how strong I am: choose me and you’ll do just fine.’ It’s a warning to rivals – ‘I’m dangerous: fight me and I could injure you for life.’  Both hinds and rivals do listen. A female can tell a great deal about the quality of a possible mate by the way he sounds. Rival stags can also get a fair idea of the competition by keeping an ear on those bellowing broadcasts. If one answers, that’s when the Scottish hills can come alive to the sound and sight of competition.

Let The Games Begin – The first stag bellows back. The challenger appears, high- stepping (red deer walk as if on tiptoe) over a ridge. Heads and antlers held high, hairs bristling, the two stags come closer. Their bellies are matted with the mix of peaty mud and urine that is the lusty stag’s body lotion of choice. The stags walk parallel to each other, a few metres apart, each moving stiffly as he tries to further weigh-up the opposition. The first stag turns, lowering his antlers. Almost immediately, the challenger locks horns. As each stag pushes, their bodies move – sometimes forward, sometimes back. Then the first stag presses home the attack, shoving the rival back down the slope. The challenger rises, turns and runs. Then the first stag returns, high stepping, to near the group of hinds. The harem is secure, for now. When he reaches the hinds, he pauses. Then he roars.

Thank you. The wonderful weather and sights we experienced made this a splendiferous experience.

This was a superb experience. Our appreciation of the beauty of the Hebrides was enhanced unmeasurably by the skill, knowledge and wonderful company. Thank you so much.

Thank you for another truly wonderful trip aboard the Splendour. . . We’ll be back soon!