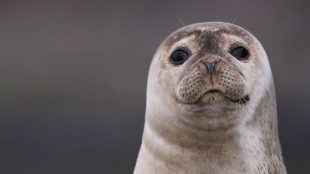 Looking back at you from rocks and sandbanks just offshore along many Scottish firths and sea lochs and you could have a great chance of seeing harbour seals striking their signature pose. Skipper Iain knows the best secluded bays of Loch Fyne, where these guys like to hang out.

Harbour seals, also known as common seals, will often haul out of the water alongside Grey’s. They come in a range of muted brown and grey tones, dappled with darker blotches. From almost as soon as they are born, onwards through the rest of their lives, common seals spend most of their time in the water. So they seem to savour every minute when they’re above it. Arching their backs helps them to stay airside just a little longer. But the curves are also a clue to something else – a transformation that happens as soon as the seal leaves air and land and enters its natural element – the sea. Ashore on a rock, a common seal looks awkward. It moves by pushing down with its front flippers to go forward in a series of wobbles. As soon as it is in the water, everything changes.

In its element – The layer of blubber that makes its body look plump on land now gives superb streamlining. Rear flippers that have little use ashore now power fast swimming. Combined with flicks of that oh-so-supple spine, those flippers help the seal speed through the water at several metres per second. Fine-tuning comes from the smaller front flippers. Held in a speed-tuck during fast bursts of swimming, they can help the seal to turn when it slows down, or steady a fish that’s been caught in their big, sharp-toothed jaw. If it needs to dive, a common seal gets help from both its oxygen-rich blood and its heartbeat, in ways a human can’t mimic. As it descends, its heart-rate slows, from 120 beats a minute at the surface to a mere 40 beats a minute. This reduces oxygen use, allowing longer dives. Some can last for up to 35 minutes although their average dive is around 5 minutes. Unlike the larger grey seals that live in Scotland, a common seal doesn’t usually make massive sea journeys. It likes to stay around roughly the same part of the coast throughout the year. But it can still travel tens of kilometres, including far offshore, in a single trip. Making it much easier to spot on our cruises.

Singers on the seabed – Things change, briefly, when males compete to impress females during the early-autumn mating time. That’s when males spend more time closer to the inshore haul-outs. They choose a spot on the seabed, get settled, then roar. Amazingly, they can do this without getting a lungful of saltwater. A common seal’s roar is very short – a mere second or two. But it allows females to get an idea of local talent. Rival males also listen to help them decide whether to compete with the roarer, or swim well clear to avoid a fight they might not win. A female who chooses one of the seabed singers will mate with him in the water. Her pup will be born in late summer the following year, usually on a sandbank or rocky shore. The youngster will need to swim as soon as the next tide comes in. At most, this will be around twelve hours after its birth, and could be much sooner. For several weeks, it will stay close to its mother, watching her movements, suckling on her fat-rich milk and gradually learning how to dive. Even before its weaned, the pup will spend more time in the water than out of it, using both sight and different calls to keep in contact with mum.

Fishing in the dark – Picture the scene for an adult seal hunting underwater. It’s dark. The water is cloudy with particles of mud and sand. In places, visibility is almost zero. But that doesn’t deter the seal. It keeps moving, at several metres a second. Thanks to super-sensitive detectors, it knows that some herring (one of its favourite fish) are nearby. Those detectors are its whiskers. They can make a common seal look cute when you see them bristling around its muzzle above water. But below the water, they’re amazing. Each one moves independently from the others, sending information to the many nerve endings on the seal’s face. Each can react to touch, but also detects very subtle vibrations in the water, such as those made by fish or another seal swimming nearby. The wavy surface of a whisker makes it easier for a seal to analyse this information as it swims. Remarkably, this whisker sensitivity means that even when a harbour seal is swimming fast, it can detect and keep track of objects much further ahead than it can see or hear them. To think that when we watch it above water, we reckon the signature sun bathing pose is its best. Common seal, hidden life. And we don’t know the half of it.

A superb introduction to Scottish cruising. Had a wonderful time with great hospitality. Our birthdays were made very special.

Wonderful, in my mind forever.

Incredible holiday! We loved every minute. Thank you for making it so great!