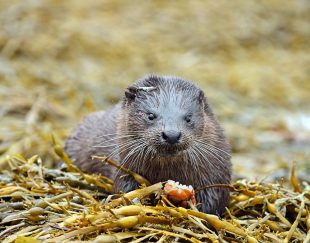 Wild spirit of the waters. There’s a black shape in the water, there in the shallows out from the rocky shore. Stop, stay very still. Even at this distance, many tens of metres away, you can’t risk raising binoculars to your eyes – the movement might spook whatever is out there. The shape shifts, as a stout, dark tail lifts clear of the water. It points to the sky, then after a second or so, slips beneath the surface. Otter!

Tactical moves – Moving fast as you can, over rocks slippery with seaweed exposed by the falling tide, you give it ten seconds, then stop. Crouching beside a larger boulder, heart pounding, you watch the water. It’s not long before the otter re-appears, head thrust up as it looks around, but doesn’t see you. There’s a V-shaped wake in the water behind its head, but no other sign of its body. Again the otter dives, and again you see the tail raised before the animal sinks from view. Another chance. You reach a cleft near the tide’s edge, and hunker down. This dive seems longer. Then the otter’s rather flat-topped, whiskery head breaks the surface. You can see the small eyes, the whiskers around its muzzle and the way the dark-brown fur is streaked and matted with seawater. Even in this condition, the otter somehow still manages to look sleek. But what’s most obvious is the fish in its jaws. It’s long and eel-like, with some dark spots near the top of its back: a butterfish. You half-expect the otter to begin chewing the prey immediately, but it doesn’t. A herring gull swoops low and circles, the otter swims inshore, just a short distance along the coast, and gets out. Clambering over the rocks, the motion seems arched and awkward, for this is a creature whose features are geared more to swimming and diving than movement across land.

Town and country, night and day – Otters live in almost every part of Scotland, from remote islands to within every Scottish city. Inland otters use freshwater, where they catch fish such as trout, salmon and eels. Mostly active by night, they can cover many kilometres along river banks, canals and across marshes, bogs and more, in search of food. But their nocturnal habits, plus their wariness of people, make them hard to see. Luckily for otter spotters, many otters live along large stretches of the Scottish coast, especially along the west coast. These coastal otters, which are active by day feed on fish and shellfish, are more often seen than the otters that live inland. Except from our regular office visitor passing through the burn most weeks.

Meet the family – As you continue watching, the reason why this coastal dweller has quit sea for land becomes clear. There, beautifully camouflaged by their brown fur against the toffee and caramel tones of seaweed, are three small otter cubs. Baby otter’s eyes don’t open for five weeks! The youngsters greet their mother with obvious excitement, nuzzling and nudging as she bites into the butterfish and the small family starts to feast on her catch. These cubs could be several months old now and are utterly different from the naked, 10-centimetre-long creatures they were at birth, somewhere in a cosy hollow near the coast. It took five weeks before their eyes opened, and another couple of weeks before they could cope with anything other than mother’s milk as food. Now, they seem to relish the butterfish, and look ready to learn how to hunt for themselves. Again, they will rely on their mother to show them what to do. Their father, a ‘dog’ otter, will also use parts of this coast, but other than mating, he takes no further part in the rearing of the litter.

A whiff of otter – They may see him, some day, without recognising him. Almost certainly, they will come to know the sweet, musky scent of his dark droppings – the ‘spraints’ that he leaves on prominent places to mark his territory – just as he will come to know from their spraints that there are young otters on the move along these shores. You watch as mother and cubs finish the food. Then the mother rolls on her back, writhing and rubbing her fur as the cubs start to gambol, push and play with each other. Later, she may visit the ribbon of freshwater that runs from a small burn at the back of the shore. She’ll need that to wash the salt from her fur and keep it sleek and waterproof. Once again, she slips into the water. This time the cubs follow. They round the headland, and are gone. Wild otters, Scottish shores. Imagine the possibilities.

Absolutely amazing. As always excellent. Thank you & Merci…. Most enjoyable food, company and scenery whatever the weather. See you next year!!

A very BIG thank you. Calm waters where we ventured and we will have to return to visit those islands and the puffins – next time Iona, Eigg, Rum and Muck…