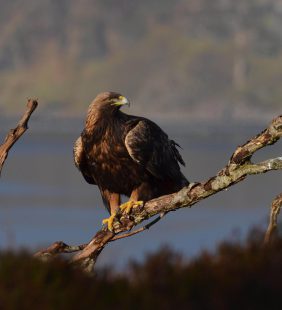 Has one massive impact on many who hear them. Once voted the nation’s favourite, for many this is the bird that symbolises wild Scotland. It’s top of the wish-list for guests with an eye for feathered wildlife, and the bird we always count lucky to see. No wonder. ‘Majestic’, ‘elegant’, ‘powerful’ and ‘magnificent’ are terms often used, without exaggeration, to describe a golden eagle.

It’s big, with a wingspan that tops 2 metres and body weight of several kilos. Males weigh-in around 3.5 kilos, females at around 5 kilos – the same as five bags of sugar. The feet are massive, able to spread wider than the span of an adult human’s hand. Talons are long and sharp-pointed. They can even crush bone when they grip. Expert at soaring, gliding and fast aerial dives, a golden eagle combines power, size and grace. The challenge is – how to see one in wild Scotland.

That Eagle Feeling – So let’s be up-front about this: there are no guarantees. What you can be sure of is that if you spend time walking and watching from our upper deck in good golden eagle ground, you’ll discover parts of wild Scotland that won’t disappoint. But there’s more. There will be an extra excitement you’ll feel from the landscape. Here’s a major reason why: a golden eagle in that landscape will see you long, long before you see it. That knowledge – that you are the watched and not simply the watcher – puts a whole new spin on any journey in eagle territory. Unconvinced? Trying seeing the world, even partly imagined, through golden eagle eyes. Check the spec – they’re amazing.

Golden Vision – First of all, golden eagle’s eyes are massive in relation to ours, filling much more of the skull. Forward-facing for binocular vision, they let in plenty of light. This falls on the light-sensing ‘retina’ surface at the back of the eye. Relative to ours, this retina is also large, giving a magnified view of the surroundings. An eagle’s retina has up to one million light-sensitive cells per millimetre, in comparison with our 200,000. So there’s finer detail in the picture. But there’s more. Two funnel-shaped areas in each eye (we’ve just one) where vision is extra-sharp. One helps with wide-angle viewing, the other for pinpoint targeting, such as when the eagle dives to chase prey. Big screen, high definition, 3-D, wide-angle and close-up, great light gathering, brilliant colours. You get the picture. These are the real eagle eyes.

Let us Prey –  You’re high above a heathery hillside, rising slowly with wings outstretched in a thermal of sun-warmed air. Turning slightly, you have a broad view of the hill and the glen below, with its scattered pine trees and small river. About a mile away, a mountain hare is sitting near a boulder. You can see the colour of its fur, blue-grey and white. You notice that it is looking away. Part-close wings and descend a little, moving in the hare’s direction. Half a mile now, and you are aware of how the animal’s sides move in and out as it breathes. Close wings further. The dive is steep and fast now, the target locked in. Wind is rushing through your wing feathers, loud as ripping cloth. The hare turns, startled. You see its whiskers twitch just before it begins to run. Tail fanned, feet thrust forward, talons spread wide. You grab, hold and feel the thud of your prey against the ground. The mountain hare twitches, then stills…

Going for Golden – Switch back to human vision. Less depth, detail and colour, but you’ll need to keep looking, to have a chance of seeing an eagle on its home ground. Any sighting, however brief, will be a bonus. Watching a hunt is unlikely, but not impossible. You need to travel in hope! Almost all the golden eagles in Britain live in Scotland, and almost all of those are in the Highlands and Islands. From the Outer Hebrides to Arran – that’s the main areas where golden eagles breed, in our cruising ground. Cruising the remote Loch Striven has also been a great spotting area this season, having a wild Scotland theme to this cruise itinerary, spot eagles from the outer decks or on one of many excursions ashore. The contrasts of scene within that ground can be enormous, from low, rocky hills and wide peatlands in the far west.. Just think of the possibilities of exploring such ground, with the golden eagle as a major lure to tempt you. Watching for the watcher.

Our first trip but definitely not our last – what an adventure! Untouchable scenery & food & very well looked after. So many fantastic memories. Thank you so much.

We feel so privileged to have spent time on the wonderful Splendour. Excellent service and food. Lovely cruising with our new found friends. Thank you for a lovely holiday.